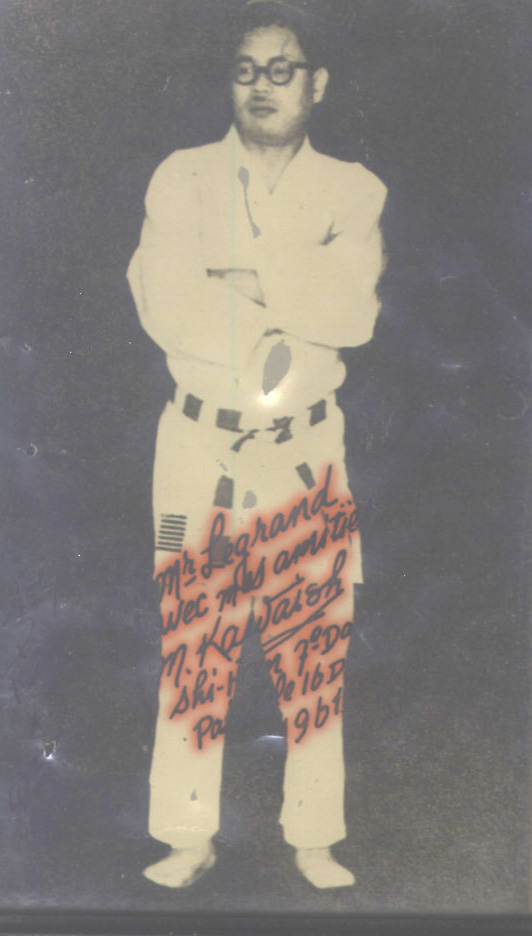 San Diego. In 1928, he arrived in the United Kingdom and established a jujitsu club in Liverpool, where he taught Aiki-jujitsu. He supplemented his meager income from teaching by wrestling professionally under the name “Matsuda”, taking on wrestlers and boxers in the ring and on stage in music halls.

In 1931, he moved to London, founding the Anglo-Japanese Judo Club and teaching Judo at Oxford University. Around this time Kawaishi was awarded his third dan by Jigoro Kano. In 1936 Kawaishi moved to Paris where he taught jujitsu and Judo. During World War 2, Kawaishi returned to Japan and was imprisoned in Manchuria for a time, but he returned to Paris after the war to continue teaching.

Kawaishi came to believe that merely transplanting the teaching methods of Japan to the West was inappropriate. He developed an intuitive style of instruction and a numerical ordering of the techniques that he felt was more suitable for the West. He adapted his teaching methods to suit the European culture. This became known as the Kawaishi Method. One of the changes he is credited with is the introduction of many colored belts to recognize advancement in Judo. This seemed to catch on in France and there was a rapid growth of interest in Judo.

Kawaishi’s system of Judo is fully described in his book My Method of Judo written when he was a 7th dan and published in English in 1955. He wrote:

And now some words of advice. Learn thoroughly all these movements. Study them carefully in all their details. One can never know too much technique. And then, above all, at the dojo train hard, conscientiously, seriously and courageously.

After World War II and through the 1950’s, the Kodokan moved more and more towards the sport of Judo; banning techniques from shiai and dropping them from the Kodokan syllabus. Kawaishi, however, continued to teach these techniques.

Mikinosuke Kawaishi authored My Method of Judo, My Method of Self Defense, Standing Judo and several other books which defined Judo for the western world.

Kawaishi placed special emphasis on kata training. He promulgated Kyuzo Mifune’s Gonosen No Kata (Forms of Counters) in Europe, and possibly his own version of Go No Kata, the forms of hardness. He also wrote the book Seven Katas of Judo. Kawaishi is credited with being the person most responsible for the spread of Judo throughout France and much of Europe. His books continue to be popular, and the Kawaishi Method is still practiced around the world today.

Kawaishi and Moshe Feldenkrais founded the French Judo Federation and he served as Technical Director for many years. In 1947 he and Koizumi held the first ever international Judo tournament between France and the United Kingdom which became known as the Kawaishi Cup.

Kawaishi died on the January 30, 1969, and his body was laid to rest in Plessis-Robinson, Paris.

Coaches Raymond Sasia in Paris, France and Jacques Legrand in New Orleans, Louisiana both trained under Mikinosuke Kawaishi.  Consequently all of their students today are products of the Kawaishi method of Judo and Self Defense. This spirit lives on today in the Judokai Warriors.